The Madness of the Cross

One of the earliest depiction of the crucifixion, a work of graffiti from sometime between the 1st and early 3rd century attesting to the madness of the cross. Intended to mock, the inscription reads: "Alexamenos worships [his] god." The Exaltation of the Cross is one of my favorites – I think it’s okay to have a few favorite feasts. Last night’s vigil was wonderful. And I was reminded: You know who preaches FAR more in the Orthodox Church than a priest, don’t you? The choir. And last night, such preaching was magnificent. That singing was lovely, of course, but the words communicated to us were what really struck me last night.  What an odd people we are to be singing about an instrument of extreme torture and death. The cross as a Christian symbol is so ubiquitous today, I don’t think we stop to think about how radical a thing it was and is. A contemporary example would be to have a hangman’s noose or an electric chair around our necks as jewelry and we write hymns about
Post a Comment
Read more

Dragging Jesus onto the Rutted Road 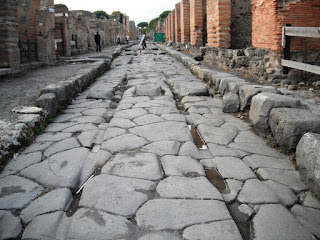