Met JONAH at the ACNA convention 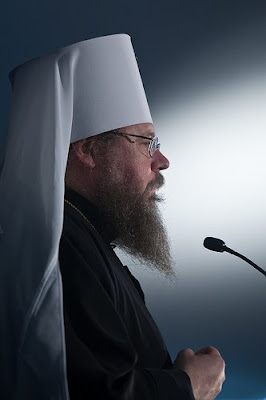 If you were not able to listen to Met. JONAH's talk to the Anglican Church in North America's Assembly yesterday, you really missed an impressive event. Not that his speech was one to go down in history for it's beauty or prose...but it was without question the most straightforward, no "punches pulled", words one could imagine being delivered. It was brave, bold, and absolutely honest. Without compromise, +JONAH simply spoke the truth.

He apologized in advance noting the potential for his words to offend some people, and he emphasized his intention to speak the truth in love. He started by citing all that we share in common and then moved on to the brutal truth of "what it would take to establish communion." What indeed? Well...in essence...they would have to become Orthodox. Now, without saying that directly, he did go through a litany of doctrines/teachings that they would have to change, abandon, and or accept. He even came right out and said without hesitation: "calvinism is a condemned heresey." (A decidedly bold thing to say given that their 39 articles have a clear calvinistic bent to them) In the end, it was very clear what he was saying to them, at least to me it was.

It was wonderfully refreshing. The very BEAUTIFUL antithesis of a politician speaking. He wasn't there to win approval, he was there to bring the position of the Orthodox Church to that assembly. And he plainly did so.

But it wasn't solely a talk about doctrinal and practical differences/similarities. The Metropolitan also laid down a fairly thick layer of Orthodox spirituality throughout it all and I've no doubt that some heard these things for the first time.

The ACNA is a diverse collection of folks who cover a spectrum ranging from Anglo-Catholics to Charismatics, all seemingly united under a banner of some semblance of traditional theological and moral teachings...to some degree they exist as a reaction against the ECUSA. I speculate that they may have trouble on the front of unity as they evolve past being a reaction against the errors of the ECUSA. But given the diversity of the attendees I can imagine some of them REALLY liked Metropolitan JONAH's talk, while others were less than impressed. (This could be discerned in the sometimes less than enthusiastic applause...in almost all cases I could tell in advance who would like what was being said and who would sit politely silent.) In the end, however, all there could not help but appreciate our Metropolitan's frankness. He was not there for a photo-op or to play games.

It was truly refreshing.

Addendum: I keep looking to see if a recording of the talk will be made available and have thus far had no luck...if I find it I will post it here. HERE is another good report on the event.

And here it is:

This is a very good summary as well: