My Class and my TA...a kindred soul 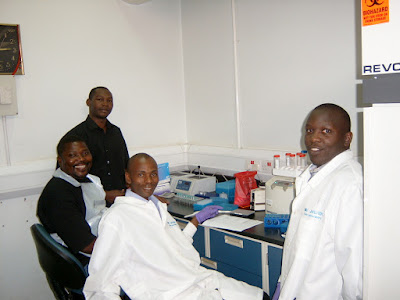 So this is my crew...my class (from right to left): Ronald, Apollo, Bosco, and Patrick my former student and now TA. Truly they are a joy to work with...if for no other reason than because they laugh at my jokes whether they understand them or not. While we all speak English, it is still sometimes a struggle to understand one another because they speak an English taught by the English and meshed with an African context. I often have to explain my anecdotes and sayings and once I do they STILL laugh. On a serious note though, they are intelligent and capable - at least as much as the students I've taught in the US, but far more joyful than any. Perhaps it is only my perception, but politeness and joy seems to be naturally impregnated in Uganda culture, for the most part.

I have particularly enjoyed spending more time with Patrick who has become a real connection for me to Uganda's culture. We talk about everything: the extent to which Museveni is a dictator, whether "The Last King of Scotland" accurately portrayed how bad Amin really was, what was in what I just ate, why abstinence and fidelity may be advertised in Uganda but not America, and all manner of other issues. Patrick is an acholi, an evangelical Christian (I believe THIS is the group he is affiliated with), and someone I consider a friend.

As with many Ugandans his life has been one that has seen its share of tragedy and strife. Raised in "the village" (which I now know to be pretty much synonymous with "country"), by the age of 6 he was in charge of 18 of the family's cows. He speaks with a gleam in his eyes of his life in the village which came to an end when Karamojong warriors (armed with AK47's) came and asserted their "divine right" to all cattle, specifically over the Okot family's cows. This combined with the horrific war with the LRA (and all that it entailed including kidnapped child soldiers) sent Patrick south into the Kampalan equivalent of suburban living.

As he sadly related this story to me, he began to get a look of disgust on his face as he told me about how he dislikes the city...how the developers in Kampala pile these cheaply built houses upon one another and how no one has any room to breath or stretch. And then the gleam returns to his face as he tells me how someday he will return to the village and raise cattle one again.

Indeed, we would seem to be kindred spirits. I hope he may someday do it and that the "strange" cultural and political turmoils that burden the people of East Africa may someday allow it.