A typical Sunday afternoon with Stacy

Stacy was good enough to invite me to join her at her sailing club yesterday afternoon. She told me we'd take a ferry to get there and so I met her down at the Marina. I was early and began pondering what sort of ferry this might be...of course I knew it would be nothing on the scale of the ferries I was used to, but perhaps a modest equivalent...carrying 40 or 50 people perhaps. Well, here is what showed up: I knew immediately I was going to have a good time, and indeed, I had a wonderfully relaxing time in a lovely environment along the shores of Lake Victoria...imagine, Stacy gets to do this every and any Sunday she likes! So while she went out and did this (rather well I might add): 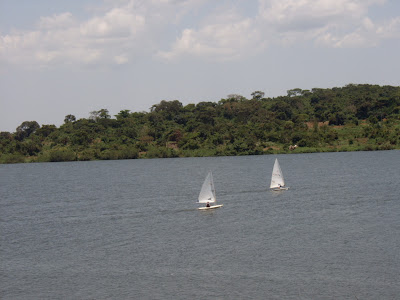 I kicked back on shore drinking a Bell lager, reading, and absorbing too much sun. The nice breeze was of benefit to both of us. As I sat I began to hear drums in the distance, banging out familiar African rhythms and tones, coming closer. You soon could hear people singing and in short order they appeared along the shore just down from the club's property. One might have thought, from the sound of it all, that they'd gone back in time to when Africa was WILD and these were the local natives executing some strange rite of passage...at least until you heard shouts of "HALLELUJAH!" Yep, this was not a native African custom at work...it was "Shall we gather at the River." 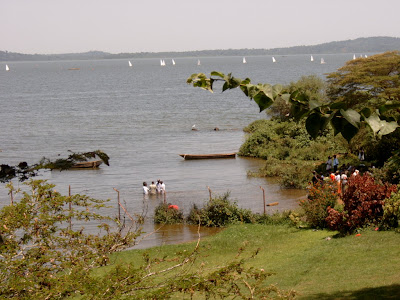 A very excitable bunch...decidedly pentecostal and I was able to explain some of what was happening to a non-sailing English woman whose husband was out trying to beat Stacy around the course. But their loud service was soon interrupted in typical Ugandan fashion: 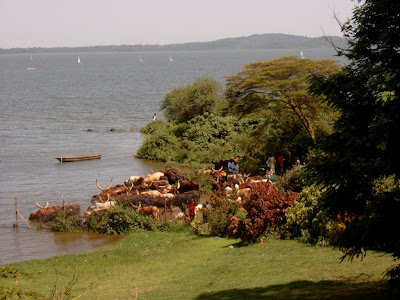 Anyway, it was a very nice way to spend the afternoon hanging with Stacy and meeting a host of very nice people...even the Ambassador from Ireland. Yes, as a Muzungu in Uganda you can quickly fall in amongst the upper echelon of society with whom someone like me would likely never have the chance to spend the day. In fairness to the Ambassador, he seems a right nice down-to-earth gentlemen. Strange place, Africa.

So, to Stacy's friends and family: fear not...she's living well over here and has some pretty impressive friends, no?