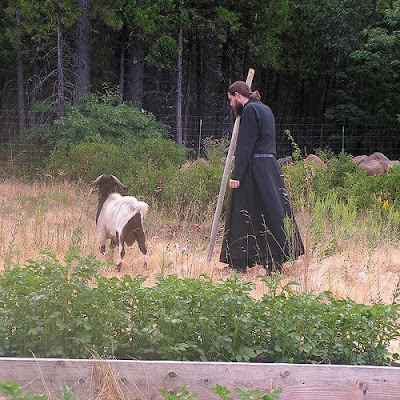 Do a bit of searching on the history of coffee and you will no doubt come upon the legend of the goat herder Kaldi and his caffeinated (sometimes described as dancing) goats. The story has some different manifestations, but the basics are usually like this: the young goat herder Kaldi (usually from Ethiopia) notices his goats are unusually active (spazzing out...I've seen it in our goats, albeit without artificial/natural stimulation) after munching on the red "berries" of a bush. He tries them as well and he finds that he is too is amazingly alert and active. At some point an Abbott enters the picture and decides these "berries" would be quite useful in helping his monks stay awake for prayers. Another story details how the Abbott might have initially thought the "berries" a bad idea and threw them into a fire, but the pleasing smell of the roasting pit of the fruit led him to pluck them from the fire and thus came into being the first roasted coffee bean.

Photo credit to my friend Volkert, taken while at the Monastery of St. John of San Francisco in Manton, CA.

What a lovely photo.