On the look out for a lost ring?

For years now I've been subjected to all manner of anti-Bush bumper stickers, often profane but also including a more clever one that states: "Frodo failed, Bush has the Ring."

However, Hubble apparently found this out in space...looking down upon us: 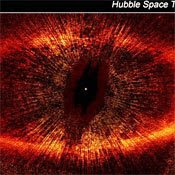 You suppose it's a coincidence? NASA will try and tell you it's a planet (yeah right), but I think someone wants their ring back. I reckon either Bush will refuse to step down and begin using the ring in January...or maybe..."hope and change" is really a means "to bring them all and in the darkness bind them"